Nobody sets out thinking they’ll rage at another driver or be a victim of road rage, but it happens. There’s no denying that driving, especially in the city, has become incredibly stressful in recent years. It’s partly due to the increasing number of vehicles on the road and partly due to our increasingly hectic and stressful lifestyles.

Some drivers seem to be in a massive hurry to get to their destination and the slightest obstacle in their way can trigger a road rage incident. Sometimes, road rage may be triggered by something 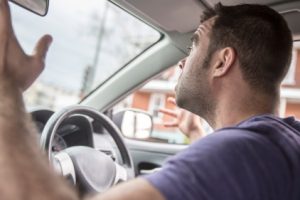 that happened earlier in the day and has been simmering, just waiting to explode.

Running late is one of the most common causes of road rage. Traffic delays or looking for a parking space are just as likely to spark a road rage incident.

Disregard for the law and for others is another common cause of road rage. Some drivers think road rules apply to others and not to them. For these drivers, aggressive driving tends to be the norm, and road rage can be triggered for no reason at all.

Regardless of the exact cause, road rage is dangerous, both for the perpetrator and the victim. The victim can suffer serious physical injuries and mental trauma while the perpetrator could be held liable to pay compensation to the victim.

How To Control Road Rage

Learning how to control and avoid road rage is a critical road safety skill and the following tips should help you either as the offender or the victim.

Give Yourself Sufficient Time To Get To Your Destination

As running late is one of the most common causes of road rage, the best way to avoid the inevitable is by leaving early, especially if you know you’ll be driving during peak traffic hours. When you know you have enough time to get to your destination, you’re less likely to get stressed and impatient, and less likely to rage at a fellow driver for no fault of theirs.

All of these are part and parcel of driving around most towns and cities. Getting annoyed at the red lights or the long line of vehicles ahead of you won’t help ease the situation. On the contrary, it might only cause your frustration to boil over increasing the risk of road rage. Many drivers find that playing their favourite music while driving can help them feel calm and reduce stress and frustration.

It’s difficult to stay focused on the road when you’re upset or angry. You’re preoccupied with your own thoughts and more likely to react aggressively to other drivers at the slightest provocation or even perceived provocation. At times like this, it’s best not to get behind the wheel. It’s safer for you and for other drivers on the road to catch a ride with a friend instead or ask someone to pick you up.

Be Patient With Other Drivers

Is the driver ahead of you driving too slowly? Does it look like they don’t know where they’re going? Don’t let it get you all worked up. Maybe the driver is lost and trying to figure out how to get to their destination. Or maybe they are having a bad day and can’t focus on their driving. Cursing other drivers who don’t seem to drive the way you think they should doesn’t help. Instead, take a deep breath, get out of their way and calmly get on your way.

Most drivers know that beeping your horn won’t really accomplish anything but they can’t help it. They beep to vent their frustration at the red light or the long line of cars moving along far too slowly. Beeping your horn in frustration won’t change anything. The only thing it will do is annoy the other drivers around you and increase everybody’s stress levels including yours. When traffic seems just too slow, you really have no option but to be patient and go with the flow.

Never Stop To Confront Another Driver

If you’re already seething and another driver crosses your path, it’s tempting to want to get out and ‘teach the other driver a lesson’. Never, ever do this. Take a really deep breath and keep driving. Don’t provoke them and definitely don’t stop to confront them. The situation could escalate and get out of hand very quickly reaching a dangerous conclusion. Stopping to confront another driver is the most dangerous thing you can do on the road.

You may be proactive about avoiding road rage but don’t expect that other drivers think the same way. You cannot stop another driver from driving aggressively but there are things you can do to defuse the situation.

When another driver behaves aggressively, here’s what you can do to avoid road rage:

If you have been a victim of road rage you may be eligible to make a road rage claim for compensation.

Most of us like to think we are good cooks.... END_OF_DOCUMENT_TOKEN_TO_BE_REPLACED

While many of our favourite on screen fictional characters can... END_OF_DOCUMENT_TOKEN_TO_BE_REPLACED

Exertion by itself is not a bad thing. Pushing ourselves... END_OF_DOCUMENT_TOKEN_TO_BE_REPLACED