While it’s perfectly legal to buy an electric scooter in the UK, taking it out on public roads is a little more complicated. There are several laws that come into play with regards to where an electric scooter can be used legally and where it can’t. 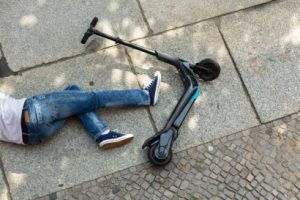 At this time, electric scooters can only be used legally on private property with no public access and with the owner’s permission. Riding on public land, public roads, pavements and so-forth is currently illegal in the UK and can cost the rider a hefty fine in addition to getting points taken off their license.

However, the government is currently operating trials involving electric scooters in England. Only rented E-scooters from operators participating in the trials can be used legally on roads (not on motorways) and cycle lanes, and only in those areas where the approved trials are operational, and you have the necessary category Q entitlement on your driving licence. Privately owned e-scooters cannot be used and would therefore still be illegal.

The trials are being carried out to explore ways to legalise the more widespread use of e-scooters in the UK as a way to tackle the pressing issues of rising pollution and traffic congestion. If it works, there’s a likelihood the laws will be amended again.

Electric scooters are basically a type of ‘powered transporter’ and known as PLEV’s (Personal Light Electric Vehicles). This term covers a variety of novel personal transport devices that are powered by a motor as opposed to being mechanically propelled. Currently, e-scooters, Segways, powered unicycles, hoverboards, u-wheels, and go-peds are all considered personal transport devices.

Under the Road Traffic Act 1998, all powered transporters are subject to the same laws and legal requirements as any other larger road vehicle. This has several implications.

In order to use an electric scooter on public roads lawfully, it must comply with a number of requirements. The e-scooter must meet certain technical standards, and have a clearly-visible number plate and visible red brake lights. It’s also required to be registered and complete an annual MOT (Ministry of Transport) test for roadworthiness and vehicle safety. In addition, the driver must have passed a driving test, possess an appropriate license, pay vehicle tax, and get the e-scooter insured. It is considered a criminal offence to ride an electric scooter on public roads if any of the above components is missing.

In addition to being illegal to use on public roads, it is illegal to ride any type of powered transporter including e-scooters on the pavements and other pedestrian-only areas, public squares, or car parks. They are also prohibited from using any spaces dedicated to pedal cyclists including cycle lanes on roads and cycle tracks.

Any person riding an electric scooter on a public road or other prohibited space is considered to be in breach of the law.

Where Can Electric Scooters Be Used Legally?

Legally, there are no restrictions on the use of electric scooters on private land that is not accessible to the public and where the land owner has given permission. This essentially means you can use it on your own property without worrying about running afoul of the law.

What You Should Know About UK Government’s E-Scooter Trial

With an apparent alarming increase in emission levels, there’s an urgent need to move over to more “environmentally-friendly” practices at every level. Electric scooters are considered an eco-friendly alternative to petrol and diesel powered vehicles. They should also help ease the traffic congestion on the roads. However, despite the many benefits to the community and to the environment as a whole, there are a few downsides to using e-scooters on the roads.

Before making it legal nationwide to use e-scooters on the road, the UK government is currently carrying out numerous trials across the country to assess the feasibility of this option.

Until now, these are just trials however, and as such there are several restrictions that apply to their use. These are some of the details of these trials:

Surprisingly to some maybe, cycle helmets are only recommended. They are not a legal requirement when riding an e-scooter.

All other laws related to safe driving apply, such as not riding under the influence of drugs or alcohol, and not using a mobile phone while riding.

What Happens If You Use An Electric Scooter Illegally?

Breaches of any law while using an electric scooter can result in several consequences. The potential penalties depend on the nature of the offence as well the gravity of any injuries caused. You could face having to pay a fine/s or even imprisonment.

Caring for an aged loved one can be challenging, but... END_OF_DOCUMENT_TOKEN_TO_BE_REPLACED

A personal injury claim can help you get the compensation... END_OF_DOCUMENT_TOKEN_TO_BE_REPLACED