Have you got an airbag injury claim? Our experience pays.

If you have suffered an airbag injury as a consequence of a faulty airbag in a car or other vehicle in which you were driving or a passenger, then you may have an airbag injury  claim for compensation.

There are a number of common injuries associated with airbags. In the majority of situations airbags will inflate as a consequence of a collision although on some occasions they have inflated in the normal course of driving. Common airbag injuries include:

Airbags should be considered as a secondary safety mechanism as opposed to a replacement of seat belts. 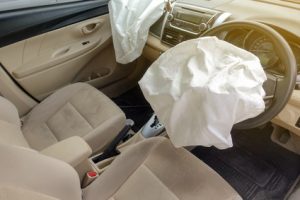 The driver and passengers in a vehicle all have a duty of care to each other to behave responsibly. The duty of care with regards to the maintenance of airbags falls fairly and squarely at the feet of the driver and these should be checked on a regular basis. Even though airbags are not mandatory by law in the UK any issues will be noted as “advisory” when carrying out an MOT. This places an obligation on the owner of the vehicle to put right any defects and where new inflation canisters are required these should be fitted immediately.

The potential route to court for compensation where the driver/ owner has failed to maintain airbags in their vehicle, causing injury, is similar to that for any other type of personal injury claim. The situation is slightly different where the airbag has been shown to be defective in design or manufacture. Under the “strict liability law” there is no need for the claimant to prove liability when it comes to defective airbags as long as the underline defects have been recorded and proven. There is also a case for claiming where garages fail to carry out maintenance of vehicle airbags during standard check such as a vehicle service/ MOT.

When you bear in mind the speed at which an airbag inflates, together with the forward momentum felt in the vast majority of collisions, it is no surprise to learn that there are numerous injuries one might suffer as a consequence. Compensation for injuries from an airbag will vary depending on factors such as the severity of the injury and the future prognosis. Our compensation calculator shows advised levels of compensation for different injuries.

Proving Fault For An Airbag Injury

When looking to prove fault for an airbag injury it is relatively straightforward where it involves already proven faulty/ defective airbags. Where an airbag should have been checked and repaired during a visit to a garage there may be a case for claiming compensation against the garage for failure to carry out their duty of care. We have also seen issues where airbags have not been correctly maintained by vehicle owners which have unfortunately led to significant injury and in some cases death.

There will be occasions where everything has been done within the power of those involved to ensure the airbags are safe to use. In these situations it can be difficult to prove negligence and as a result impossible to claim compensation. However, where there is negligence which has resulted in an airbag related accident and injuries it is advisable to contact a personal injury solicitor for advice.

To make an airbag injury claim you will need to provide the relevant evidence to support your claim. This could include confirmation of a design/ manufacturing issue, badly carried out repair/ maintenance during a vehicle service or negligence on behalf of the driver in fixing an airbag which was obviously defective. Photographs of any injuries, the scene of the accident, witness statements and any tell-tale signs of negligence, with regards to the airbag, will also strengthen your claim.