Christmas is usually a period of celebration, a time to sit down with the family and relax around a roaring fire… but unfortunately, this isn’t the case for everyone during the festive break. Regardless of whether you’ve been naughty or nice, some people just can’t seem to avoid Christmas-related injuries – from hanging lights and defective decorations, to cuts from wrapping gifts and falls from unreliable ladders. Who knew Christmas could be so deadly?

Well, here at ACA, we thought it’d be interesting to see which injuries cause the most upset over Christmas. Using data provided by CPSC, we’ve sieved through an entire years’ worth of accidents and discovered 337 that occurred over the festive period in 2016.

From cuts while wrapping and opening presents, shoulder sprains and slips, to swallowing Christmas decorations whole – this list has it all! We’ve also broken it down for you and tidied up the descriptions so you can have a read for yourself. Some memorable examples include:

36-year-old male was putting up Christmas decorations, looked up, sneezed and swallowed a thumb tack.

44-year-old female was on a ladder taking down Christmas lights when she slipped and
fell off her porch.

10-year-old male was riding a hoverboard he got as a Christmas present and fell off – he landed on his forearm on carpeted floor.

34-year-old female was drinking alcohol at a Christmas party and fell over, hitting her head on a table.

65-year-old female was carrying a Christmas tree down steps to basement at home and fell.

32-year-old male was dancing at a Christmas party when he twisted and sprained his left knee.

After reviewing all 337 accidents, we found that there was a fairly even split between males (157 injuries) and females (180 injuries). We then looked at what parts of the body get injured the most over the festive period. Out of all the accidents we looked at, 52 (15%) were lower back injuries due to lifting heavy objects (likely Christmas decoration boxes from the attic), while 43 (13%) were cuts to the hand and another 41 (12%) were bumps to the head. 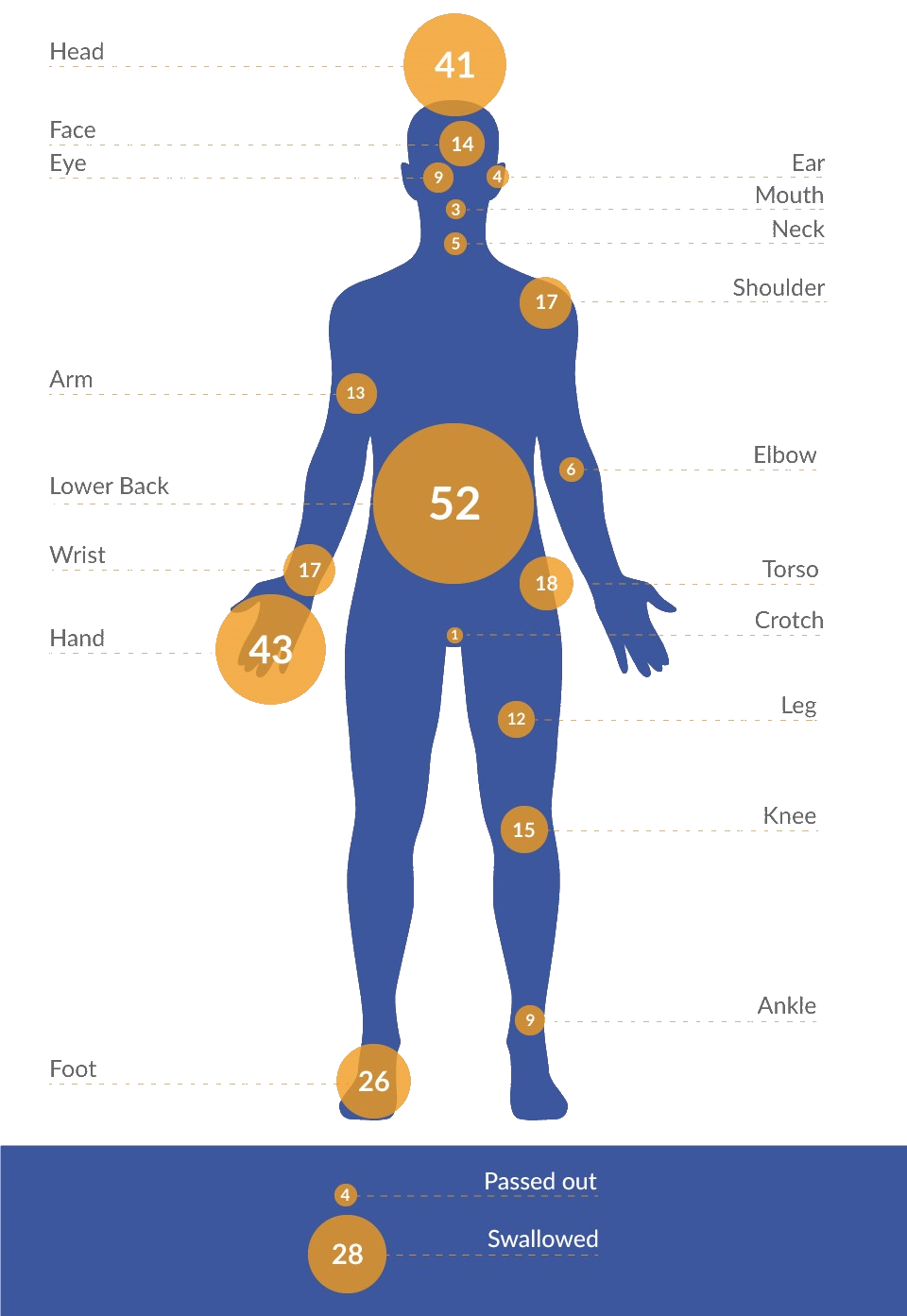 By this point you might be thinking that most of these injuries happened to children. Well… yes, but there are still a surprising number of accidents involving adults. In fact, Children aged 0-9 only accounted for 21% of all accidents, be it from swallowing toys to dropping ornaments. The remainder came from “responsible” adults: both the 30-39 and 60-69 age ranges each accounted for 13% of all Christmas injuries. Remarkably, those in their 20s proved to be the 2nd safest (we have no idea how, but they did!). 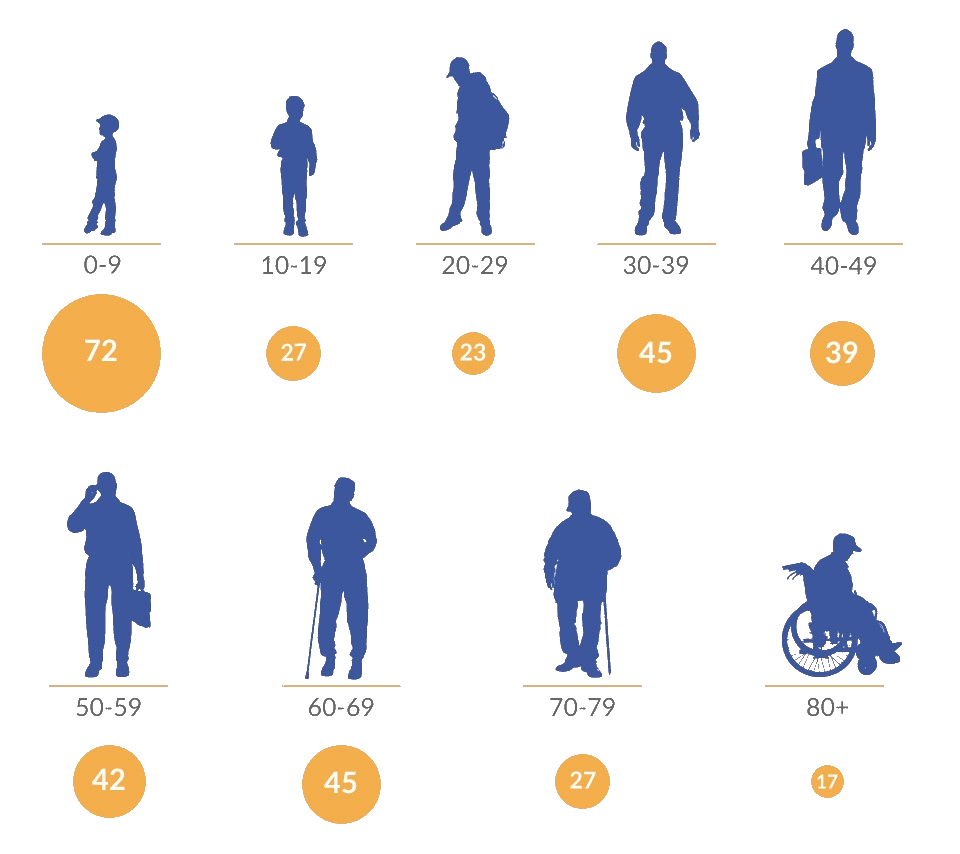 So, what might be causing all these injuries? Well, after a bit of analysis, it turns out that hanging up Christmas lights is the most dangerous task for winter, totalling 101 injuries (30%), followed closely by decorating the Christmas tree, 82 injuries (24%). However, only 9 injuries stemmed from partying too hard, and another 10 were injuries caused by presents (opened and unopened).

Lastly, we looked at the types of injuries sustained. There were 28 instances of swallowed objects, and 142 falls, trips and slips (60 of these happened on ladders, so best be careful when next hanging up your decorations!). 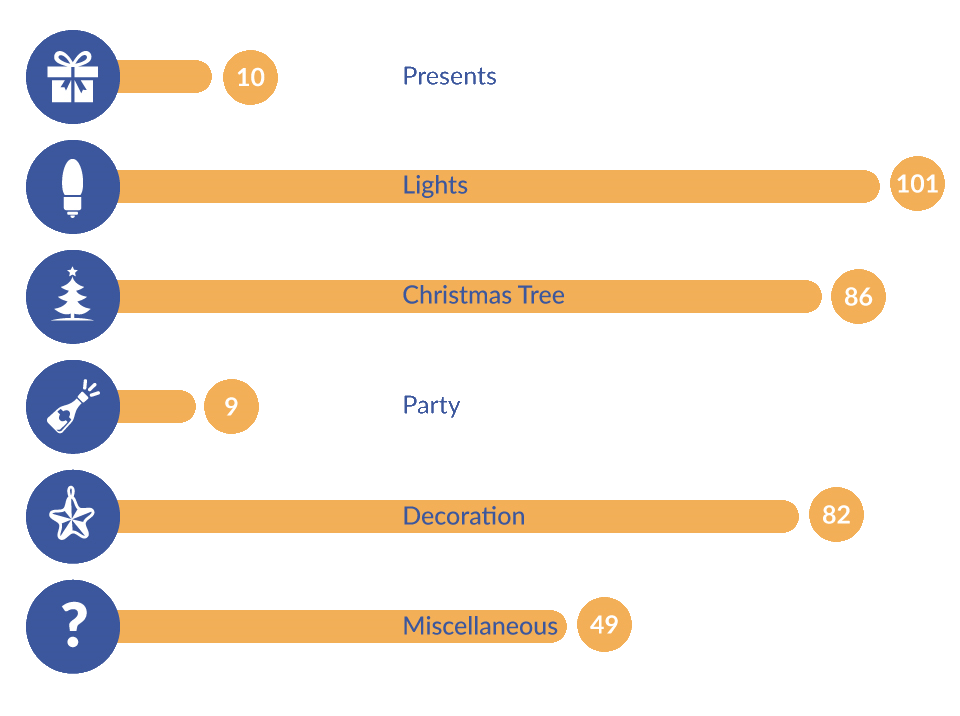 To conclude, the festive season is a time of celebration and joy, but it’s still a dangerous time of year! So, next time you’re up a ladder and hanging up your favourite Christmas lights, try to take some extra care and attention.

For the full list of Christmas injuries and descriptions, see here, and happy Christmas!

It’s come to that time of year once again- a... END_OF_DOCUMENT_TOKEN_TO_BE_REPLACED

Is your job killing you? Contrary to popular belief, police... END_OF_DOCUMENT_TOKEN_TO_BE_REPLACED

The law clearly states that employers are responsible for making... END_OF_DOCUMENT_TOKEN_TO_BE_REPLACED