Up until just a few decades ago, asbestos was considered a remarkable compound mainly due to its fire retardant properties. Being lighter, stronger, more durable and a lot cheaper than the alternatives, it quickly became an indispensable part of insulation for homes, schools, hospitals, libraries and many other buildings. It was also widely used as roofs for sheds, in the manufacture of bricks, concrete and furniture and also in shipbuilding for constructing pipes, boilers, steam engines and turbines. Asbestos was also often mixed with vinyl, resins, plastics, spray coating, textured coating and several other products.

One unexpected product which contained asbestos in large quantities was fake snow. Due to the texture and colour of the asbestos flakes, it was also used as a decorative element on wreathes and Christmas ornaments. It was also used as a stand-alone product to give the living room a festive look.

The Dangers Of Asbestos

The dangers of asbestos first came to light in the early 1900’s when several miners in asbestos-mining towns started developing lung disorders and several deaths were reported in relatively healthy, young men. Subsequent inquiries and post-mortem reports showed that the lungs of the affected men had a build-up of certain fibres which were long and angular. Upon further investigation, it was determined that these were asbestos fibres which were present in the asbestos dust.

Within a couple of decades of these findings, extensive research was conducted, which showed that asbestos fibres had the potential to cause serious health problems. The most dangerous among them were amosite and crocidolite, which were found to cause mesothelioma. Mesothelioma is the cancer of the mesothelium, a thin layer of tissue that covers the lungs and other internal organs. Mesothelioma is still prevalent in the UK today.

Eventually over what may be considered a protracted timeline the use of asbestos was banned in all industries in the UK. Unfortunately, despite the ban, asbestos can still be found in pipes, floors and roofs in older buildings and in various other items, including older Christmas decorations.

A rough, fibrous texture is one of the many identification markers for asbestos. If you have any Christmas decorations or ornaments that have a rough texture and snowy appearance and that look like they belong to the mid-nineteenth century, chances are high that it contains asbestos. Even if the package is unlabelled, anything you cannot date with absolute certainty and looks like hardened candy floss, there is a high possibility that it could contain asbestos.

What To Do Should Your Christmas Decorations Contain Aabestos?

If you suspect that one or more of your Christmas decoration items contains asbestos, care should be taken to not disturb the item at all. If at all you have already disturbed it inadvertently before realising what it was do not disturb it any further than you already have. You should contact your local council immediately and they can advise you on how to deal with it safely. Advice on dealing with asbestos in the home can be found on the Health and Safety Executive website.

If you have found fake snow in your old Christmas decorations, all the rest of your decorations have been compromised as well. Even if they are not made of asbestos, it is almost a certainty that the miniscule asbestos fibres have settled onto the surface of these decorations and have contaminated them. Even disturbing them or placing them anywhere in the house is bound to spread these fibres and enable them to enter your lungs.

The absence of fake snow does not mean that your decorations have not been exposed to it at all during their lifetime. If you have ancestral decorations that have been passed down by your grandparents from the mid- 1900s, it is best to have them disposed of properly rather than risk a potential health hazard.

Given that it is very difficult to identify asbestos when it has been mixed with other materials for manufacturing decorations and ornaments, it is recommended that you not hold on to them if 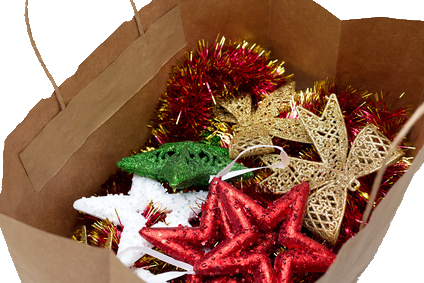 they’re from that era. If they hold a lot of sentimental importance to you, and money is not an issue, you can always have them tested in a lab for confirmation on the presence of asbestos. Otherwise, it is best to have them removed from your home.

How To Discard Asbestos Laced Decorations

Discarding asbestos-laced decorations is not something you should attempt by yourself. This is because there is a high risk of asbestos exposure if any fibres are released while you are handling the item. You should contact local experts specialising in asbestos disposal to ensure that the risk is properly assessed, and collection of the contaminated materials is done carefully without risking exposure to your family or the surrounding.

Discarding asbestos is a highly specialised activity and there are laid-down guidelines and rules with regard to wrapping, labelling and disposal to ensure that the fibres are not released into the environment and inhaled by other people. Visit this page on the Government website for help with asbestos removal form your home.

Carbon monoxide (CO) is one of the better-known and highly... END_OF_DOCUMENT_TOKEN_TO_BE_REPLACED

Last updated on January 17th, 2022Exertion by itself is not... END_OF_DOCUMENT_TOKEN_TO_BE_REPLACED

Exposure to toxic chemicals can have a wide range of... END_OF_DOCUMENT_TOKEN_TO_BE_REPLACED