Even though there have been significant changes in the way in which personal injury claims are processed, crash for cash is still a problem in the UK.

Crash for cash is a term used to describe “deliberate” accidents whereby fraudsters will manufacture an accident and then claim compensation for whiplash and possibly additional expenses such as exorbitant repair and storage fees. The true impact of crash for cash incidents is difficult to clarify although the UK’s Insurance Fraud Bureau (IFB) estimate a figure of £340 million is likely just the tip of the iceberg. So, what is the true impact of crash for cash and how can you protect yourself?

What Is Crash For Cash?

It is highly likely that a member of your social circle will have been impacted by a crash for cash scam in the past. Estimates suggest that potentially one in 10 personal injury claims are linked to such incidents although again this could be even greater. There are many different examples of fraudulent road traffic accidents and some of these will no doubt register with your own roadside experiences.

The majority of fraudulent accidents involve a vehicle pulling out unexpectedly, accelerating and then going heavy on the brakes. This style of driving gives following vehicles minimal opportunity 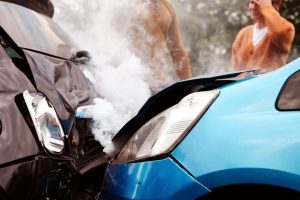 to avoid a rear end collision which it is assumed by many people as difficult to defend against. We have even seen instances of cars which have had their brake lights removed thereby giving following drivers even less opportunity to react.

Some of the more “adventurous” scammers have been known to stage their own accidents, with gang members driving each of the vehicles, and claim large amounts from insurance companies. Indeed, what are known as “ghost accidents”, which never actually occurred, have also been noted by insurance companies!

While the scams are done purely and simply for cash we can only imagine how many serious injuries they have caused which have gone unrecorded.

Cost Of Crash For Cash

As touched upon above the IFB estimates that crash for cash scams in the UK cost around £340 million a year, with in excess of 50,000 personal injury claims linked to these types of scam. Aside from the fact they actually put the lives of innocent drivers in danger the fraudsters are not content with” traditional” compensation. A number of fraudsters have been shown to work with local garages on an array of crash for cash scams charging exorbitant fees for repair and storage. The fact that many victims are scared to call in the police when such an incident occurs leaves them open to extortion.

There was a report in 2015 of a family owned garage in Wales working with fraudsters, scamming the insurance industry to the tune of £763,068 over a four-year period. The fraudsters were eventually caught when CCTV footage recorded their scams and inflated damages claims. This is not an isolated incident and if one family owned garage can scam the industry out of such a large figure, how many other similar or larger rings are in operation?

Protecting Yourself From Crash For Cash Scams

It is depressing to think that there are gangs of criminals on the roads today who will willingly put lives in danger to claim exorbitant compensation from insurance companies. Unfortunately this is the world we live in although thankfully there are some things you can do to protect yourself from such fraudulent activity:-

Insist On Calling The Police

If there is one thing that scammers and fraudsters hate it is the involvement of the police. So, whether or not you suspect you may have been the victim of a crash for cash scam you should involve the police in any road traffic accident.

You will find that the majority of fraudsters will take a step back if you mention the police. Even if the police do arrive, and the fraudsters appear determined to continue with their scam, do not forget that the authorities have been there and seen it all before.

Collect Your Own Evidence And Pictures

It goes without saying that you should collect your own evidence and pictures at the scene of any potentially fraudulent traffic accident – indeed you should do this as a matter of course with any accident.

The idea that you may have hurt somebody will deeply concern many motorists and very often you can forget the detail of the incident the next day. Therefore it is vital that you collect your own evidence and take as many pictures as possible. This will help you to remember the incident in detail if it does go to court.

You would be surprised how many innocent witnesses will be willing to step forward and assist with any defence you have concerning a road traffic accident. We automatically assume that bystanders have no interest in getting involved but this is not necessarily the case.

As we touched on above, insurance companies see potentially fraudulent activity every day of the week and they may spot something which you missed.

While it may seem common sense, you should always ensure there is more than sufficient room between you and the vehicle in front to allow you to stop safely. It is debatable whether this would impact the majority of crash for cash scams but it would certainly reduce the overall figures.

Some drivers now go as far as to install dash cams to record their every activity while on the roads. The cost of dash cams today is minimal especially compared to their potential value in the event of an incident.

Many people automatically assume that a rear end crash is indefensible and in some circumstances this can be the case. However, where you suspect you may be the victim of a crash for cash scam you should not automatically dismiss your defence.

We have touched on a number of factors you might like to take into consideration to protect yourself as well as the potential overall cost to the insurance industry. Remember, the majority of additional costs incurred by the car insurance industry will be passed on to unsuspecting innocent customers.

So, we all have a duty to report potentially fraudulent road traffic accidents and try to bring down the criminal gangs which make millions of pounds each year.

Have You Been A Victim Of A Crash For Cash Scam?

If you’ve been the victim of a Crash for Cash scam or had any “close calls” or would like to offer any further suggestions, advice or tips then please leave a comment below, we’re always interested in what people have to say.

Welding can be an extremely dangerous profession with multiple hazards... END_OF_DOCUMENT_TOKEN_TO_BE_REPLACED

Try for a moment to imagine a world without the... END_OF_DOCUMENT_TOKEN_TO_BE_REPLACED

Back pain can be debilitating and can leave you struggling... END_OF_DOCUMENT_TOKEN_TO_BE_REPLACED